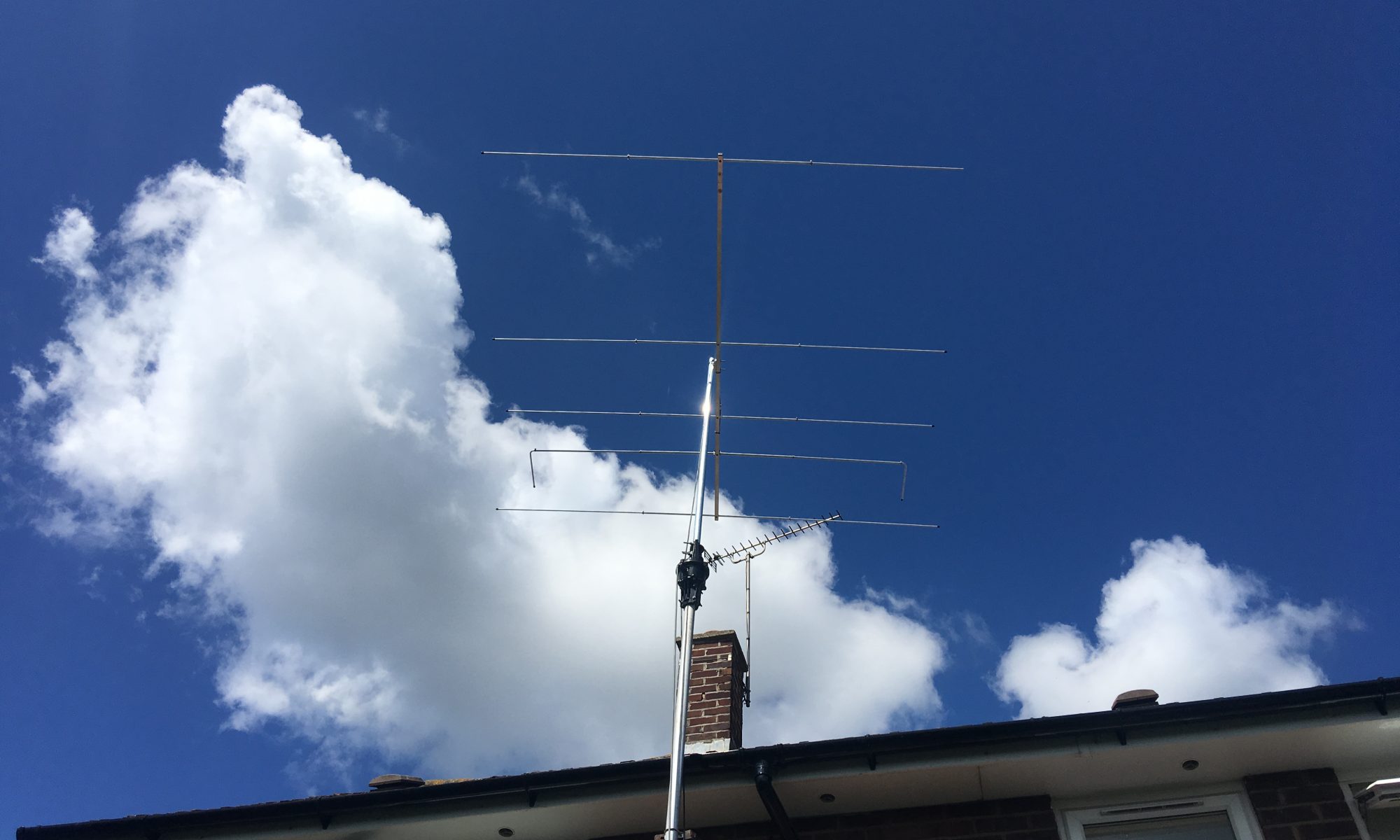 Moved the 6m Op-Des to the T&K Brackets that were fortunatley left on the back of our house by the previous occupiers, again its a temporary thing as the longterm plan is to put a smallish mast in the back garden which will allow me to chop and change antennas with not too much difficulty, its working well in most directions although when directly North im beaming slightly into the roof of our house which isnt ideal, it could really be doing with being about 4 foot higher than it currently is but im happy, worked 5T5PA on 6m FT8 last night for an ATNO for me, there are a few directions where the noise level is significantly higher up to an S4/5 it seems to be when im beamed over my neighbours properties, I suspect some cheap and dirty chinese switch mode PSUs being the cause but I have yet to investigate further, for now i can live with it. 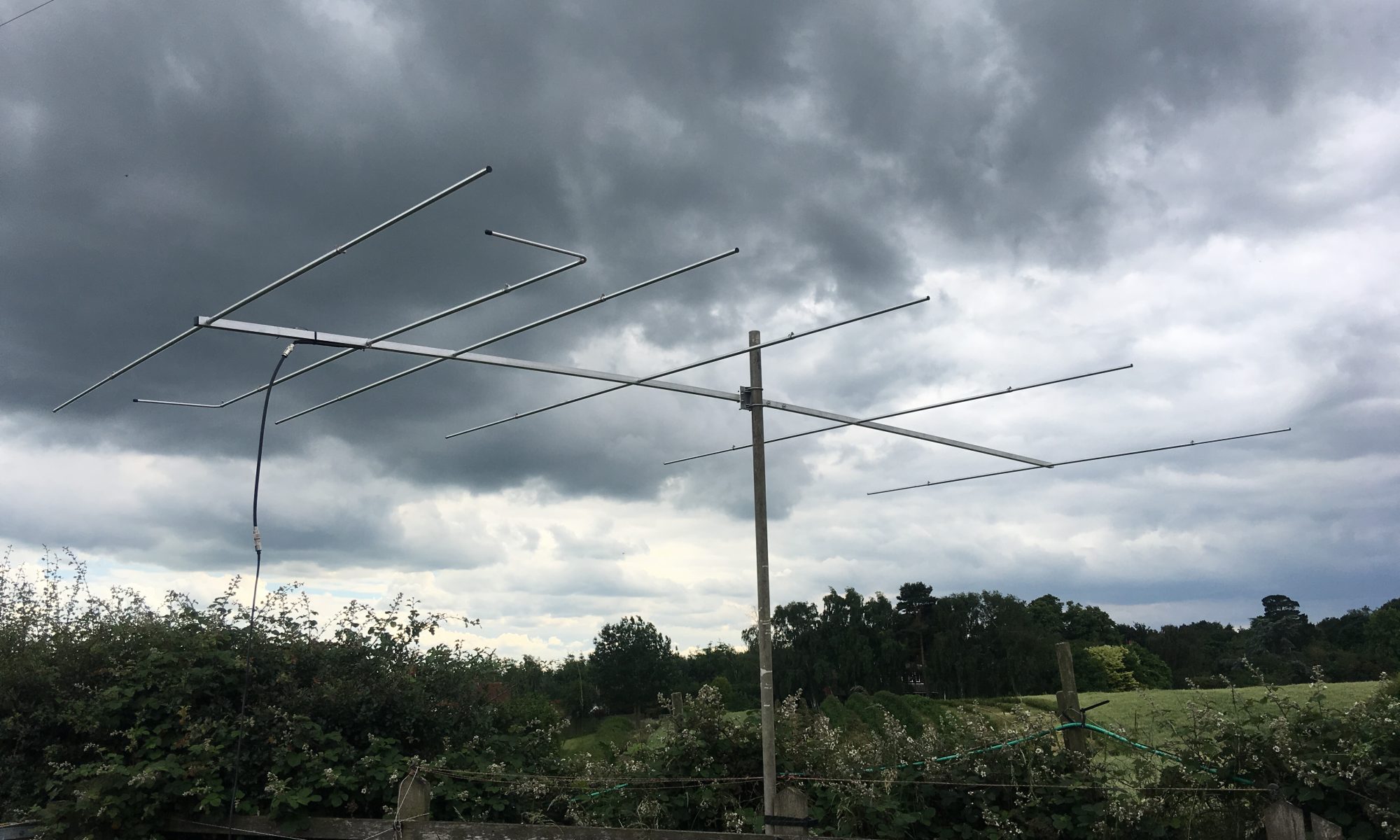 When I was planning my 6m antenna for my home QTH i originally planned on building and installing a lightweight 6 Element Op-Des antenna, after partially building it, it became pretty obvious it was a little too large for my very small city location and equally small garden, eventually I decided on the smaller 5 Element Op-Des which has been working very well over the last couple of weeks it has been up, this morning whilst doing some work at my workshop I decided to finish building the 6 Element Op-Des as it seemed silly leaving it half built, luckily my workshop is located at a friends property in the country which is very rural and as he is also a Ham putting antennas up for testing isnt really an issue.

I decided as I said to finish the 6 El, I finished it early afternoon, the antenna is very lightweight as the boom is only 1in square aluminium and the elements are through the boom, I put it on a temporary pole at about 8ft off the ground and bungeed it to a fence, it was a very heath robinson affair but I just wanted to get it up to test it out, I then realised I had left my antenna analyser at home so I just connected up some cheapy crap  RG8X coax and plugged it in to my old IC-706 which I am using in my workshop, amazingly the first signal I heard was NP2J calling CQ from the US Virgin Islands, the strange thing is that I had worked him the day before from my own house for an ATNO, Dan was CQing and was in for over an hour,  so im very happy with the 6 El at such a low height as well, now to try and find somewhere to mount it properly, the workshop is only a 10 minute drive from my house so I often will have a listen about here during breaks from work.

Finally up and running on 6m for the pretty much non existent Sporadic E season, have a homebrew 5 Element Op-Des up on a temp mast at 15ft(ish) its working well and managed to bag TR8CA during the first few days of it being up but so far the E’s season has been terrible, little or nothing for the last week or so, just the odd quick E’s opening into Southern Europe, heard NP2 from the US Virgin Islands a couple of evenings ago, very weakly but never managed the QSO, all in all its looking like this being the absolute trough of the sunspot cycle will also result in a poor summer for sporadic E.

Im hoping to move the antenna to back of the house in the next week or two, there is a set of T&K brackets that were left on the house from the previous occupier so why not put them to good use, just need to purchase a scaffold pole and that should mean I can get the 6m beam up to about 30/35ft.